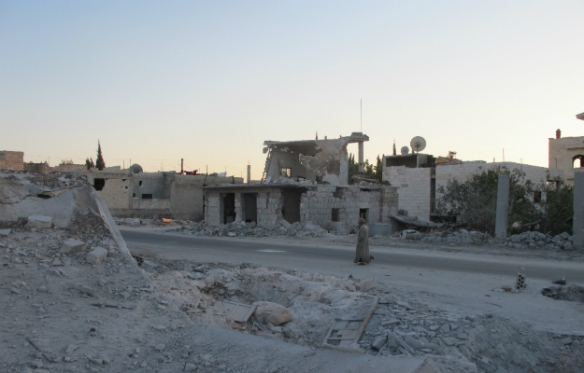 As a counterpoint to Huriyet Daily’s Point of view this article; Guerrilla Country I linked to in Foreign Policy has a different take.  The article is fascinating in its details but the money item is this:

As a no-holds-barred battle rages to the east in the city of Aleppo, the pulse of the Syrian insurrection can be taken in Jabal al-Zawiya. This complex region of hills covered in olive groves and plains entwined with narrow roads of asphalt or dirt is the homeland of Hussein Harmoush, the first officer to publicly defect in 2011, and of Riad al-Asaad, the leading figure of the Free Syrian Army (FSA). Here, the insurrection is deeply rooted in the social fabric: The war these men are waging is always present, and its path is inseparable from their identities.

The FSA’s lack of formal hierarchy appears to be an asset here, as it allows the citizens of the region to organize the insurgency locally and tailor their military response to their environment. Although the rebels in Jabal al-Zawiya recognize a general leadership above them — and though they place themselves under the FSA’s umbrella — these semiautonomous groups of fighters are organized along village and family lines. That gives them several advantages: They have natural intelligence-gathering networks, and they know the terrain like the palms of their hands, having relied on back roads for supplies and secret meetings for many months. These assets, coupled with basic military skills, have allowed them to drive a far superior foe out of the towns.

Now I am far from the sound of guns and have never had the ill luck to be any closer than in an airliner on the original 9/11 but this piece rings true to me.  That is not to say it’s a good thing or bad thing, it is a reasonable facsimile of a fact on the ground.  What it says is that the FSA is probably a lot more effective than numbers and weaponry might indicate.

The FSA does not need to have its boots on the ground everywhere as it has co-opted the local fighting age inhabitants into a cell based ground holding force.  This ground holding force is self-supporting, motivated and dangerous because of its local knowledge and backing.

The FSA assault groups can stay very lean and relatively disbursed and yet have considerable military effect   They can move through the held ground quickly even if on foot because they will have local guides, support and not need a significant logistics tail or carry a lot of food and ammo.  Of course that means they cannot carry out a stand up fight from the move but that should happen rarely since they have eyes everywhere.

That’s not to say the situation sounds good.  The picture and the description are unsettling.  This is a war very much like those in the Balkans during the partisan wars associated with WWI, WWII and the ColdWar.  A war of sects who until the dogs were loosed had lived interlaced with each other for decades if not centuries (not always at peace mind you.) Now with the emperors (dictators) military police no longer suppress all,  distrust and pent-up hate is unleashed and leads down an ever tighter and more destructive spiral.

This is what the US and others should have been trying to prevent, the fragmentation and violation of the populace to a point where their natural distrust of ‘the other’ will make it all but impossible to put a working multi-cultural society back together again.

Lebanon (Syria’s neighbor and sometime satrap) is another multicultural nation in name only, but it has learned to live with its divisions, hopefully it can teach Syrians how to live with theirs when the dogs of war grow sated.