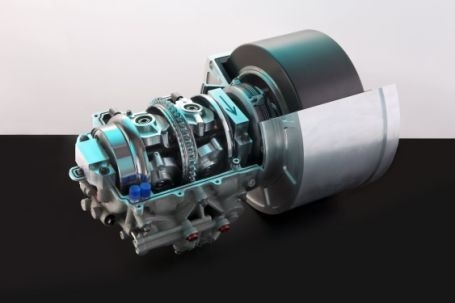 The M-KERS flywheel hybrid system is an example of small innovation business R&D that can be readied for volume production by a global manufacturer.

“We have identified that the biggest barrier to commercialization of an innovation is confirming the competitive advantage for a customer when every factor is taken into account,” Deering told AEI. “So we refocused our engineering capability to provide precisely the expertise and resources required during this critical stage.”

Being small can be an advantage for the innovators. Torotrak itself doesn’t have volume manufacturing capability, but it has greatly increased its ability to supply prototype and pilot volumes to help its Tier 1 customers bridge this gap. “This helps a Tier 1 establish the technical and commercial viability of the technology while also creating a growing income stream for Torotrak,” explained company Chairman John Weston. “It’s an approach based on the commercial needs of Tier 1s, moving away from the traditional approach of trying to sell them a relatively unproven idea.”

But the tech applications are cool:

(1)For car applications, Torotrak’s technologies are aimed at downsized engine solutions and hybridization (via flywheel systems) where the designs offer cost and packaging benefits. Its V-Charge variable-drive supercharger for gasoline and diesel engines, now entering a new test and demonstration phase of the latest V2 version, is claimed to be capable of boosting torque from zero to 95% in less than 400 ms, which overcomes one of the liabilities of engine downsizing.

(2)A flywheel-based energy storage system developed by Flybrid Automotive, a company in which Torotrak holds a 20% share, is claimed to deliver performance that is similar to established HEV powertrains with superior packaging, at about one-third the cost.

…(though) “An electric system typically has a large battery and a useful range with the IC engine completely switched off; a flywheel application does not.”

… Flybrid’s flywheel system will propel a vehicle for about half a mile – not impressive per se but very useful in managing the engine operating point. The flywheel could be used to power the car in parts of the drive cycle where the engine would be inefficient…