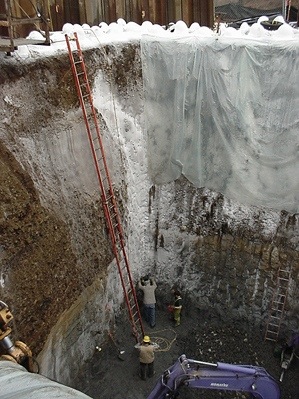 Cold storage: A freeze wall created for a construction project by the company SoilFreeze
How the Fukushima Ice Barrier Will Block Radioactive Groundwater

Japan plans to stop leaking radioactive groundwater at Fukushima with an underground wall of ice. Here’s how it would work. … Vertical pipes are to be drilled or driven into the ground at one-meter intervals, creating what looks like an array of sub-soil fence posts. Fourteen 400-kilowatt refrigeration plants would pump -20 °C to -40 °C coolant down each pipe to absorb heat from the ground, producing an expanding cylinder of frozen earth.

In roughly six weeks, those cylinders would fuse together to form a continuous barrier that keeps groundwater out and contaminants in. The result would be a solid barrier from the surface extending approximately 95 feet down to meet a low-permeability layer of clay and rock. And while it would require long-term chilling to endure, the wall is immune to power outages lasting days or weeks. “It would take months or years to thaw the wall out,” says Daniel Mageau, vice president and design engineer for Seattle-based contractor SoilFreeze.