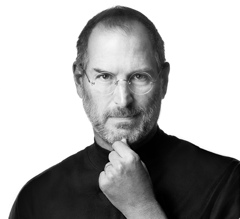 Steve Jobs has died.  A visionary, futurist and industrialist of remarkable scope, his passing is a profound loss to the tech world and the wider world which he had changed several times in his too short life. He stood on the shoulders of giants and made them look small as he pushed us upward. He was ‘at’ if he wasn’t ‘the’ pivot of change a remarkable number of times since the 80’s. and while at times he was almost pushed aside his vision and drive always showed through and thrust him back onto his world changing course.  There are no better words than ones that have been said before for other great men:  Our world is poorer for his leaving it and I fear we will not see his like again in this age.