This StratPage article on the LCSs is very good, but has a negative tone that is disappointing.  As the article notes with a bit of hyperbole the LCS is a pretty radical break with the past, LCS 2, Independence being by far the more radical and perhaps deserving of the hyperbole.  Where has our patience gone, whenever something radically new is tried there are problems and with LCS even with LCS 2 the problems seem relatively minor in the big picture.  Also the fact that LCS went from concept to hulls in the water in less than a decade is tribute to sensible expectation setting on the part of the Admiral(s) who have pushed this family forward.  Though tying hull and weapon system together may make sense for the battleships (carriers and cruisers of our age) it makes small craft too expensive and obsolescent before launch.

The trimaran LCS 2 is essentially all aluminum built by Austral (relocated Australian fast ferry company.) She was launched later and has had a lot more or at least more serious issues than her fraternal sister LCS 1.  Most pictures of Independence are either slow speed or docked, far fewer deployment pictures than of LCS 1.  This should have been expected (and was by most) when you have this radical a departure its bound to collect a lot of baggage.   But the ship has a huge flight deck and is highly stable in rough weather, as well as being fast.   In the end its possible the Independence will be the more successful sister, though it’s just as likely that both will be considered successful but better at certain missions than the other.
By the way the concept of a trimaran warship was originally raised by the Royal Navy and as above the builder is an Australian company experienced in building catamaran ferries (which have had their own issues.) Who says the US doesn’t take good ideas from abroad? 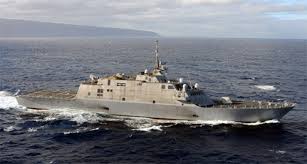 Just as a matter of interest I had the honor of getting a tour of the LCS3 the Freedoms sister ship Fort Worth at her builder Marintte Marine.  The ship has huge empty spaces but the ‘fixed’ facilities are pretty tight . The bridges of these ships remind one more of something out of a Star Trek movie than a WWII flick.
And while the hull is the size of a WWII destroyer they are (when geared up for the mission) vastly more lethal the crew size is more in line with a WWII PT boat than the Tin Cans of yore.
The idea behind LCS is for a capable craft that is available in the numbers needed for dealing with busy coastal waters. These are the modern equivalent of the Gunboats of the nineteenth century. They are not the modern cruiser (called destroyers) battleships (called cruisers) or battleliners (carriers.)  These ships are the corvettes, the torpedo boat destroyer, the frigate, of today and with their vast flexibility and high power they will most likely find uses far beyond those envisaged today.
Mark