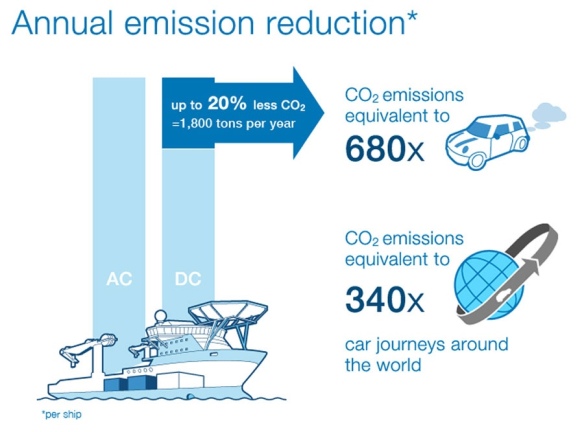 ABB’s dc grid trims the weight and size of the electrical system by nearly a third.

Norwegian ship owner Myklebusthaug Management plans to become the first company to employ a direct current (dc) power grid on board a ship. A 5000-ton (4535-t) offshore platform support vessel will deploy ABB’s Onboard DC Grid, which ABB says will improve efficiency and reduce emissions for ships with electrified propulsion.

In existing electrical propulsion vessels, more than 80% of electrical power consumption goes to thrusters and propulsion drives. They use dc connections derived from an alternating current circuit.

Rather than converting ac to dc, the Onboard DC Grid optimizes propulsion by distributing power through a single dc circuit, according to ABB. ABB predicts that once ship owners see the benefits of electric propulsion, dc grids will see rapid acceptance. Myklebusthaug Management’s 93-m (305-ft) oil field supply and construction vessel is scheduled for delivery in the first quarter of 2013.

“We believe that by 2020, approximately 20% of ships will be electrified, and quite a bit of that will be dc,” said Heikki Soljama, head of ABB’s business unit marine.

One key reason the Onboard DC Grid saves power is that the ship’s engines no longer have to run at a fixed speed. Engine speeds can be adjusted to optimize fuel consumption.

However, ABB’s system extends the many dc-links used in all propulsion and thruster drives. That lets shipbuilders retain the dc generators, inverter modules, ac motors, and other proven products.

The grid can be used for any electrical ship application up to at least 20 MW. It operates at a nominal voltage of 1000-V dc. The power distribution can be arranged with all cabinets in a single lineup using a multidrive approach or it can be distributed throughout the vessel by short-circuit proof dc busbars. That gives designers more freedom for locating electric components, which can result in a more functional vessel layout.

Good synopsis of why DC and to some degree why electric…this is the future but as always the path is long and takes odd jaunts that will ‘drive men(proponents) mad.’