This was the sort of thing sci fi writers were dreaming about decades ago. It would be a miracle indeed if it became reality in this century. When I first saw this I suspected a rather dry April Fools joke, I hope the joke was on me.

The plasma (blue) is injected into the rocket nozzle. Lithium metal rings (red) then collapse at great force around the plasma, compressing it to fusion conditions. The sudden release of fusion energy vaporizes and ionizes the lithium in the magnetic nozzle, causing it to eject and power the rocket forward. Credit: University of Washington, MSNW
Read more at: http://phys.org/news/2013-04-rocket-powered-nuclear-fusion-humans.html 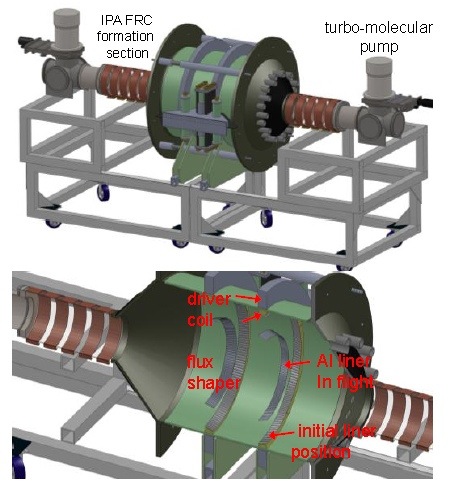 This is the fusion-driven rocket test chamber at the University of Washington’s Plasma Dynamics Lab in Redmond, Wash. The green vacuum chamber is surrounded by two large, high-strength aluminum magnets. These magnets are powered by energy-storage capacitors through the many cables connected to them. These coils are used to drive the collapse of metal rings placed on the inside wall of the vacuum chamber. Credit: University of Washington, MSNW