A 3D-printed injector plate delivers 20,000 lbs of thrust in a hot-fire test on August 22.
NASA

Fidelity is an issue with 3D printed parts, even using advanced techniques like DMLS. (direct metal laser sintering) Greg Barnett, the lead propulsion engineer on the project, … “The surface is a little rougher,” he explained; however, those variations are within a consistent range and can be compensated for in the design. …

The test results on the 3D printed components have been extremely positive; Barnett and Williams told Ars that the 3D printed injector is equivalent in performance to the traditional machined one. The next step is to move on to an injector with more elements, which will mean testing with more power.

3D printing—or “additive manufacturing,” as it’s called when you get industrial like this—is seen by NASA as a vital way to keep rocket component development costs down. In a lot of ways, the ability to rapidly prototype via DMLS harkens back to the Apollo-era development method of fast physical iteration. Rather than spending a tremendous amount of time performing deep, computer-based analyses of rocket components, NASA can rough in a design and then print and test a component within hours or days.

The deep analysis and simulation tools are still available and still used, but the months- or years-long physical manufacturing time is drastically reduced. This gives engineers the flexibility to design and build in the most optimal fashion. They can use complex software analysis where necessary, but they don’t have to rely solely on computer modeling.

In the days of Apollo, NASA operated with effectively unlimited funding, which it used to create a nation-wide army of contractors with tremendous manufacturing capabilities. Design-by-iteration was feasible because there was so much design going on. These days, the picture is entirely different. “It’s almost a cultural issue,” explained Williams, “where a part can cost so much, you get into what I call ‘analysis paralysis.'” Without additive manufacturing, prototype rocket parts that can withstand actual hot-firing can cost so much and take so long to produce that when you finally get a physical component to test, you’re already hoping the tests show that it’s perfect—otherwise it would take too long to redesign. With additive manufacturing, that paralysis goes away, and engineers can iterate as needed on actual physical components. 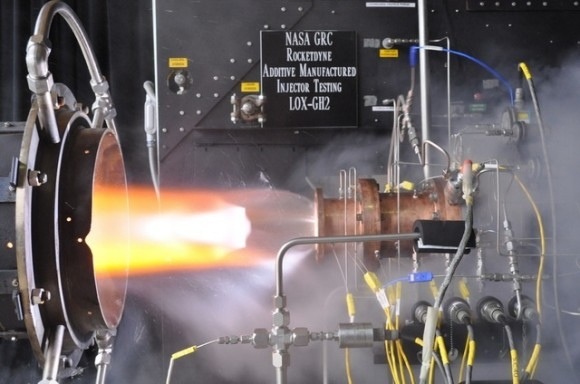 …NASA didn’t use ABS plastic that most 3D-printers use. Instead, the agency used custom 3D printers to spray layers of metallic powder using lasers. The lasers spray the powder in a specific pattern in order to come up with the desired shape for an object. In this case: a rocket engine injector.

New research key to revolutionary ‘green’ spacecraft propellant at Phys.org
Got me interested in this new material…liquid…which is REALLY cool, in a hot sort of way, look at this briefing by the Air Force Research Lab…this Rocket Fuel burns at 1600degC but it just sort of fizzles if thrown on a fire, sits there when hit by a hammer, does not create clouds of toxic fumes and while not a great ice cream topping is not wildly poisonous either…and this stuff was actively developed, not just stumbled across. Such is the power of modern research tools and materials knowledge.

The GPIM project aims to introduce AF-M315E as a green alternative to hydrazine (Credits: NASA).

Love the Logo-shot! The space ship’s pretty simple really, it’s biggest downside would seem to be no fly around capacity if one misses the runway line up, but 1) how often does that happen theses days? 2) if theirs any juice left in the oxidizer tank a short burn would do the trick. Anyone know the plan: depend on getting it right every time or lighting ‘er up for the go-round?

The SpaceX Merlin 1D engine, the more powerful, more robust and less expensive
follow on to the operational 1C, has been certified for flight.

This is the family, an interesting thing about the Heavy is the plan to have the strap-ons share fuel with the core, consequently when they separate the core is still fully fueled, a big performance increase. 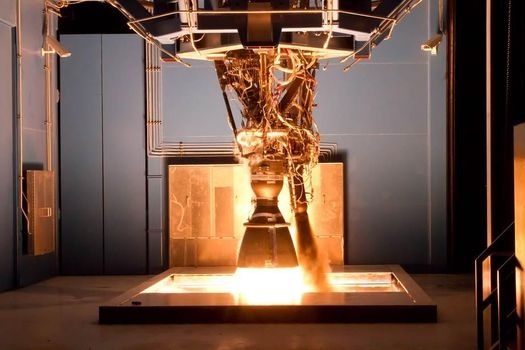 Cool videos at the Verge article.

Held at height and then landed straight down unaffected by what looks like a reasonable breeze.

Second gen Falcon this year, possibly Falcon Heavy first flight, soft water return for a booster this year and ground return next year! Each demonstrates fundamental capabilities and the power of a committed commercial / civilian play with tech and team unfettered by bull crap FARS oversight dead weight. But each is advancing tech at a rate that seems more reminiscent of the sixties NASA and aviation tech| 2nd gen Falcon: new improved engines, Heavy: buddy tank w/ common boosters engines, any of the above: fly back boosters w/ powered soft landing first at sea then on land. Each step something daring and commercially valuable. I’m not sure how some of the competitors keep from going into terminal depression, if Musk’s SpaceX team nails the string the old guard are toast.

File photo of the NK-33 engine firing on a test stand. Credit: Aerojet

From space flight now an article on Orbital Science’s Anteres launcher, specifically the rocket engines. It’s interesting that the Soviets were so good at some things and awful at others.

But then engineering is a very neutral endeavor and one that can adsorb your passion and develop your stoic nature…very good things in Stalinist Russia.

One should also remember that while ‘the west’ got the ‘brains’ of the Nazi German Rocket cadre (like Werner vonBraun) the Russian’s got the great majority, the working engineer types, who in the end have to slog through the agony of turning strokes of genius into real hardware, and it’s the slog that gets you deep capability not the strokes.

Using simple physics instead of complex materials technology. But sometimes it takes tech progress a long time to get to the simple. 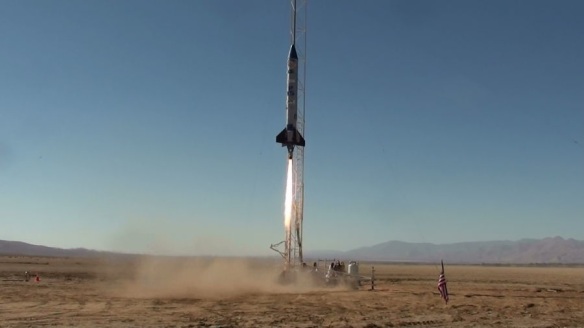 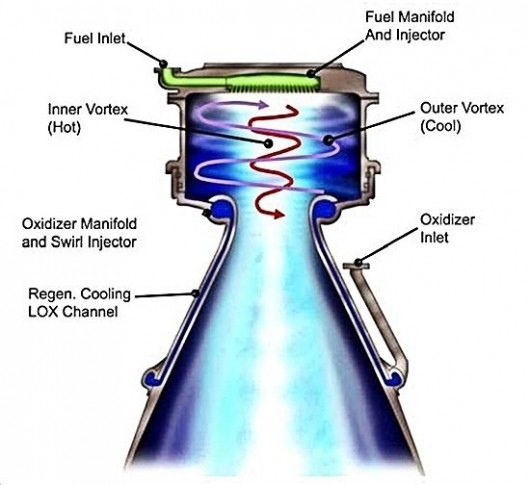 Simple, so very simple and so very elegant.

This was the sort of thing sci fi writers were dreaming about decades ago. It would be a miracle indeed if it became reality in this century. When I first saw this I suspected a rather dry April Fools joke, I hope the joke was on me.

The plasma (blue) is injected into the rocket nozzle. Lithium metal rings (red) then collapse at great force around the plasma, compressing it to fusion conditions. The sudden release of fusion energy vaporizes and ionizes the lithium in the magnetic nozzle, causing it to eject and power the rocket forward. Credit: University of Washington, MSNW
Read more at: http://phys.org/news/2013-04-rocket-powered-nuclear-fusion-humans.html

This is the fusion-driven rocket test chamber at the University of Washington’s Plasma Dynamics Lab in Redmond, Wash. The green vacuum chamber is surrounded by two large, high-strength aluminum magnets. These magnets are powered by energy-storage capacitors through the many cables connected to them. These coils are used to drive the collapse of metal rings placed on the inside wall of the vacuum chamber. Credit: University of Washington, MSNW

The J-2X engine before installation at the Stennis Space Center. Credit: NASA/SSC

Cool tech at NASA cutting manufacturing time from 9 months to 9 days. This is for the STS Senatorial(pork) Transportation System that I’ve no love for but proving tech like this is one of the ways that government R&D tax dollars provide broad value since success is not squirreled away as a trade secret.

This World and Others
Create a free website or blog at WordPress.com.