There are arguments that Apples pricing power is limited and that the cost of making a premium small pad like the mini is something like 200 meaning that they break even at somewhere between 250 and 300 considering distribution and profit.  There were arguments for a 250ish (essentially subsidized) and 300ish (bare profit.)  Whereas the base 330 (ok 329 but don’t get me started on the last 9 pricing phenomenon!!) supposedly provides Apple with its traditional high profit margin.

Now this seems to beg the question how do these folks really know Apples costs?  Yes its a public company but to be honest there are a lot of details hidden in the financials that are really hard to parse. Apple is highly profitable but it also has very high costs relative to its competitors who are either one shot wonders or whose HW / OS work is subsidized by a primary line business which the machine; Google-Nexus tab, Amazon-Kindle, Barnes&Noble-Nook, are important marketing&sales outlets, not fundamental products as products…as much as some chattering set blowhards try to conflate the business models.

The iPad mini is something of a steal, if 200 is the cost of a good 7 in screened plastic housed small pad .  Why do I say this?: 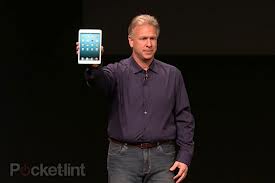 I’m certainly going to buy one and it won’t be a low-end unit, though I will also in the near future buy one of the new-new-iPads, with the understanding that its possible if not likely that Apple will upgrade the product again in 6 months.

Why is Apple doing this? It wants to dominate the space in most people’s minds like it dominates the smart phone, standard tablet, one piece desktop, and ultra-portable markets. It has moved sharply into these markets (which were not at the time particularly active) and dominated with yearly product refreshes of significance reinforced with a masterful media circus strategy.  They are late to the game in the small pad market having at first seen it as a value only market, they stayed out till they figured out how to roll it up into the Apple iOs business, which I think they have as explained above.

As e connected as I am I still enjoy sitting down in the morning and reading the Indy Star in its print form.  I have to admit I sometimes spend more time reading the funnies than anything else, but I do scan the first section (and the first and last page of Metro) But I do often read articles and this OpAn (opinion/analytical) piece from the Washington Post caught my attention.  I think Ezra Klein’s caught on to the problem,

There is a simple reason health care in the United States costs more than it does anywhere else: The prices are higher.

Really! It is almost that damned simple.  This graphic or the table version in the Star is infuriating and eye opening.

Of course it’s not an explanation in and of itself and one could take Mr. Klein’s piece as a pointless frontal attack on the health care industry but the point is much more subtle. As I have discussed broadly before the issue is that things cost as much as they do because the way the current system creates vast inequality almost on purpose through weak and or distorted pricing signals.

A Gifted Man is a great TV show….how is that relevant? In it Michael Holt a brilliant neurosurgeon finds himself ‘gifted’ with the ghost of his wife, a socially conscious doctor who he had divorced (apparently amicably) years before.  While Michael runs Holt Neuro, an extreme high end clinic for the wealthy and powerful, Anna is running a Free Clinic, Clinca Sanando, in a poor section of the city (NewYork though its portrayed as almost any city.)  Anna has been killed in a hit and run, and her ghost goads him into helping the free clinic which is on the edge of folding.  (I could go on, its good TV but won’t.)

The thing is A Gifted Man points out without grinding ones nose in it the huge disparity in health care between the rich and the poor.  It also make the point that one can do good even superior general medicine in very spartan conditions if you have a dedicated and reasonably competent crew.  You can do even more if you back that up with truly superb facilities for those who need it, but those facilities are very expensive and somehow need to be supported by the clients.

Now the the article points out the cost of medicine in many countries with more socialized medicine and I grew up in England then in middle class America where the conditions in the Doctors office were more reminiscent of the Clinica than Holt, today, I’m middle upper middle economic tranche and all the offices are much more like Holt than the Clinica, but why? Partially because I bitch if I have to wait for an appointment, and partly because I never see the cost until after the fact (except for dental work beyond the basics…becuase many more people lack dental coverage than lack general health insurance.)  In most ways the reason I go to my general practitioner is because he (or his office) keeps track of my overall health and is a central repository of my health records and I value that.  I’d value it even more if I could see it as a cost rather than an overhead hidden in the other post facto numbers I get….in no other part of my life do I have such uncertainty about the cost and yes perhaps because its hidden I’m not as reticent about going, because I know that in the end I can afford it, but many others are not as lucky and the uncertainty is discouraging, and then there are the folks with no coverage, who get bills many times what I pay…in some part because the Medical Establishment figures that in the end with many of those folks will end up paying pennies on the dollar, if you multiply the dollar by some large factor then the ME is more likely to at least cover costs one way or another.

I do not ever feel that Micheal Holt does not deserve Holt Neuro or that the folks at the Clinica should have unfettered access to Holt Neuro.  I do not (most of the time) begrudge the well off hospitals their cathedral like front lobbies.  I do feel that the system is seriously distorting the messaging power of pricing and under suppressing the power of pricing the Medical Establishment hold because we are all frail humans who if not now then one day will have health issues to deal with.

Establish portable health savings accounts and require published pricing for standard procedures based on standard practice codes (and all procedures should have such codes and a cost you can find if you look or enquire.)  Don’t take away the tax advantages of the coverage companies provide, but extend it to everyone who buys their own insurance.  Reduce that tax advantage over a couple of decades.  Allow insurance companies to negotiate costs but they have to do so based on standard codes and publish some metric of what they are paying, make it illegal to charge different customers different prices for the same procedure (and don’t allow rebadging, the procedure codes have to be the same for all customers.)   Make it illegal for companies to charge different people different insurance rates, insurance takes into account your age and that’s it, different insurance companies can sell different sets of coverage and different age windows but that’s it.   Make the market place fair and flat.  An actuaries job is to make sure the insurance company collects enough money to cover its costs and make a reasonable profit! But again they have to publish their rates and compete for customers and if the marketplace is open and fair the prices will drop to the minium that covers costs and reasonable profits.