My first published novel Moon Dreams, published through Smashwords and available for Nook, iBooks, Sony Reader as well as Smashwords and other eTailers (for FREE!!!) is still available and is seems to be doing reasonably well.  It gets 5 stars by those who read it.  Its classic Sci Fi, how a new invention might be used and how it affects the world, it has it all, invention, a nutty scientist, hero, heroine, space battles, a reasonably happy ending etc.

My second book, Under Siege is on sale for $1.99 on the same web sites, and is I think (I should) is well worth the price.  Its a far future Sci Fi in a rather different tradition than Moon Dreams, talking about the human condition and the tides of civilization using the tapestry of a decadent empire. 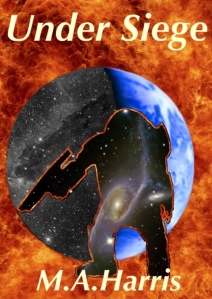 The third book (or the first half of it) currently available just on Smashwords and not published yet is Elgin.  The story of a modern day cowboy who finds himself in a completely different role as the avatar of an ancient guardian sent to earth to protect it from the predation of other interstellar species and to protect humanity from itself, in a world where Magic, absent since before the height of the Roman empire, is returning.