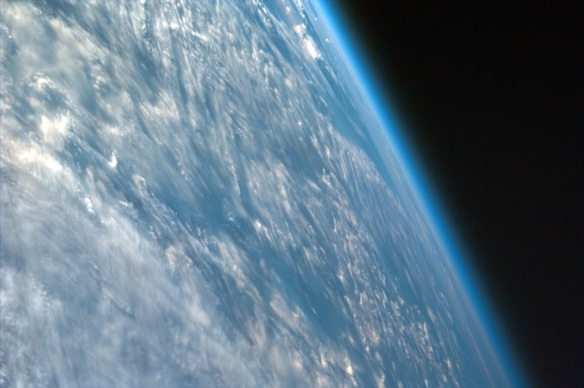 Modeling of various atmospheric pressures shows that Exo earths could have life friendly atmospheres across a broader range of orbital distances than our thin aired original. Since we are ‘seeing’ a lot of big worlds out there this is promising, though of course too much of a good thing is bad, as our sister world Venus shows. 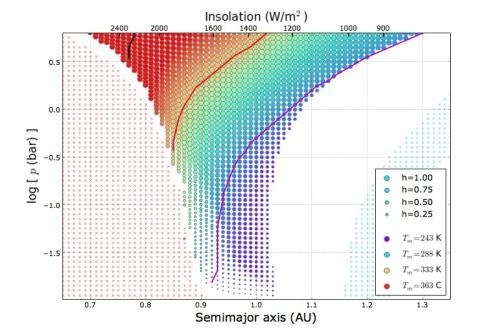 A figure from Vladilo’s paper summarizing the general findings. The area of the circles is proportional to their habitability. The bottom axis shows the virtual worlds’ distance from their Sun-like star, with 1 AU (astronomical unit) representing the average Sun-Earth distance of approximately 150 million kilometers (93 million miles). The top axis (insolation) shows solar radiation (in watts) received on a unit area (a square meter). Surface pressure is on the y axis to the left. Credit: Vladilo et al. 2013, ApJ, 767, 65; http://wwwuser.oats.inaf.it/astrobiology/planhab/

Artist’s concept of a planet where one side always faces its star, with the dark side covered in ice. Credit: Beau.TheConsortium

Red dwarfs are small, faint stars about one-fifth as massive as the Sun and up to 50 times dimmer. They are the most common stars in the galaxy and make up to 70 percent of the stars in the universe, vast numbers that potentially make them valuable places to look for extraterrestrial life. Indeed, the latest results from NASA’s Kepler space observatory reveal that at least half of these stars host rocky planets that are half to four times the mass of Earth.