WSJ: What We Lose if We Give Up Privacy
A civil libertarian reflects on the dangers of the surveillance state. By PEGGY NOONAN 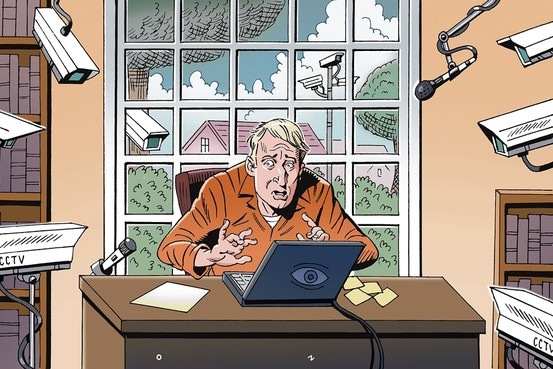 I have to extract a lot of the piece, it discusses the issues much better than I can:

What is privacy? Why should we want to hold onto it? Why is it important, necessary, precious?

Is it just some prissy relic of the pretechnological past?

We talk about this now because of Edward Snowden, the National Security Agency revelations, and new fears that we are operating, all of us, within what has become or is becoming a massive surveillance state. They log your calls here, they can listen in, they can read your emails. They keep the data in mammoth machines that contain a huge collection of information about you and yours. This of course is in pursuit of a laudable goal, security in the age of terror.

Is it excessive? It certainly appears to be. Does that matter? Yes. Among other reasons: The end of the expectation that citizens’ communications are and will remain private will probably change us as a people, and a country.
***
Among the pertinent definitions of privacy from the Oxford English Dictionary: “freedom from disturbance or intrusion,” “intended only for the use of a particular person or persons,” belonging to “the property of a particular person.” Also: “confidential, not to be disclosed to others.” Among others, the OED quotes the playwright Arthur Miller, describing the McCarthy era: “Conscience was no longer a private matter but one of state administration.”

Privacy is connected to personhood. It has to do with intimate things—the innards of your head and heart, the workings of your mind—and the boundary between those things and the world outside.

A loss of the expectation of privacy in communications is a loss of something personal and intimate, and it will have broader implications. That is the view of Nat Hentoff, the great journalist and civil libertarian. He is 88 now and on fire on the issue of privacy. “The media has awakened,” he told me. “Congress has awakened, to some extent.” Both are beginning to realize “that there are particular constitutional liberty rights that [Americans] have that distinguish them from all other people, and one of them is privacy.”

Mr. Hentoff sees excessive government surveillance as violative of the Fourth Amendment, which protects “the right of the people to be secure in their persons, houses, papers, and effects, against unreasonable searches and seizures” and requires that warrants be issued only “upon probable cause . . . particularly describing the place to be searched, and the persons or things to be seized.”

But Mr. Hentoff sees the surveillance state as a threat to free speech, too. About a year ago he went up to Harvard to speak to a class. He asked, he recalled: “How many of you realize the connection between what’s happening with the Fourth Amendment with the First Amendment?” He told the students that if citizens don’t have basic privacies—firm protections against the search and seizure of your private communications, for instance—they will be left feeling “threatened.” This will make citizens increasingly concerned “about what they say, and they do, and they think.” It will have the effect of constricting freedom of expression. Americans will become careful about what they say that can be misunderstood or misinterpreted, and then too careful about what they say that can be understood. The inevitable end of surveillance is self-censorship.

All of a sudden, the room became quiet. “These were bright kids, interested, concerned, but they hadn’t made an obvious connection about who we are as a people.” We are “free citizens in a self-governing republic.”
.
.
.
Mr. Hentoff’s second point: An entrenched surveillance state will change and distort the balance that allows free government to function successfully. Broad and intrusive surveillance will, definitively, put government in charge. But a republic only works, Mr. Hentoff notes, if public officials know that they—and the government itself—answer to the citizens. It doesn’t work, and is distorted, if the citizens must answer to the government. And that will happen more and more if the government knows—and you know—that the government has something, or some things, on you. “The bad thing is you no longer have the one thing we’re supposed to have as Americans living in a self-governing republic,” Mr. Hentoff said. “The people we elect are not your bosses, they are responsible to us.” They must answer to us. But if they increasingly control our privacy, “suddenly they’re in charge if they know what you’re thinking.”
.
.
.
What of those who say, “I have nothing to fear, I don’t do anything wrong”? Mr. Hentoff suggests that’s a false sense of security. “When you have this amount of privacy invasion put into these huge data banks, who knows what will come out?” Or can be made to come out through misunderstanding the data, or finagling, or mischief of one sort or another. “People say, ‘Well I’ve done nothing wrong so why should I worry?’ But that’s too easy a way to get out of what is in our history—constant attempts to try to change who we are as Americans.” Asked about those attempts, he mentions the Alien and Sedition Acts of 1798, the Red Scare of the 1920s and the McCarthy era. Those times and incidents, he says, were more than specific scandals or news stories, they were attempts to change our nature as a people.

What of those who say they don’t care what the federal government does as long as it keeps us safe? The threat of terrorism is real, Mr. Hentoff acknowledges. Al Qaeda is still here, its networks are growing. But you have to be careful about who’s running U.S. intelligence and U.S. security, and they have to be fully versed in and obey constitutional guarantees. “There has to be somebody supervising them who knows what’s right. . . . Terrorism is not going to go away. But we need someone in charge of the whole apparatus who has read the Constitution.”

That ‘someone’ in charge and a faint subtext that there is some level of relaxation of the constitution that may be valid bothers me more than a little.

Advances in technology constantly up the ability of what government can do. Its technological expertise will only become deeper and broader. “They think they’re getting to how you think. The technology is such that with the masses of databases, then privacy will get even weaker.”

Mr. Hentoff notes that J. Edgar Hoover didn’t have all this technology. “He would be so envious of what NSA can do.”

As above, it is going to get easier to dive deeper, MINORITY REPORT posited ESP for preempting crime. It’s not impossible that soon technology could do the same thing…with the same problem that some minority of the ‘targets’ would never have acted on the urges, ideas, or impulses that got them preemptively targeted…indeed we are undoubtedly killing ‘innocent”terrorists’ today, some who might have turned away if they had not been evaporated.

The terrorists have won if they twist us into some distorted remnant of ourselves or worst themselves. And one of the things they hate most about us and understand the least is our assumption of trust…I trust that another may be different, think different, have faith different from me and mine but I trust them (within reason) to hold certain things dear…

Consequently I’m a bit troubled by any assumption that we need some huge and empowered organization that is cut out of the normal mechanisms of governing. Yes we have to have to use these tools but if they cannot be used without violating basic rights one of which is an assumption of innocence, then they should be used in the main to figure out how they can be defeated so others cannot use them against us, and their own people…

I do not understand the fear that drives so much of this, the US stands astride the world and yet we do not rule. Instead we cry at others pain and try to do the ‘best thing’ we can, often to the detriment of ‘the easy thing’ or even ‘the only thing.’

OK the ‘intelligentsia’ (or demagogues, ideologues) across the rest of the world often deride us, let them, it not us trying to emigrate there. OK other places do ‘this,’ ‘that’ or ‘the other’ better, we copy the best and ignore the rest, and none of those ideas would work as well broadly across a geography and citizenry as richly diverse as ours!