WIRED: The Abomination of Ebooks: They Price People Out of Reading BY ART BRODSKY 10.02.13

Exotic Contraband:  Lost among the stars:  Aliens are real and they’re here. Unfortunately they aren’t here for intellectual stimulation, they’re here to make cold hard cash. And they aren’t interested in letting the authorities, theirs or ours, in on their racket.

This is the story of survivors lost in a universe that they hadn’t imagined, and the story of their rescue and return.

It’s only 99cents and a steal at many times the price if you enjoy a good read with a mix of hard and space opera sci fi with a little action and romance thrown in.  And why is that ship called the Stonewall?

See it all at Smashwords.

An update from TechnologyReview regarding the Qualcom Mirasol based products.  Only in 5.3″ and all obviously based on the same hardware platform right now.  5.3″ is more in line with Asian tastes than US so it makes sense to focus there first  The long hang time (4 years from first hoopla) and small size indicate issues with the manufacturing technology, but nothing helps ManTech more than going to volume.  Hopefully 7, 9 and 11 inch units will follow soon.

Mark Cooker the founder of Smashwords is also an epubs apostle, he’s out there selling the eBook revolution to the readers, writers and everyone in between.  He’s got a post up on Amazon’s new Kindle Direct Platform (KDP) is a Kindle only eBook platform that promises the author some part of a 500K / month pot depending on your percentage of downloads from KDP inventory, I suppose on top of the direct sales.  Now as he says himself he has a bit of a vested interested in dissing this because KDP because it cuts Smashwords out of part of the market but his point is that in essence its subtly anti author. Once on KDP you cannot sell through any other venue so you have to depend on Amazon being the principal sales channel for eBooks.  And this 1 limits your market, and 2 in the long term if Amazon ‘wins’ puts the author at the mercy of Amazon.

Mark also points out that Amazon is pushing changes to the law about who can set the price on a book.  It appears as if Amazon has always wanted this power, rather than the publisher.  Now that may seem reasonable with Smashwords the author is the publisher, why shouldn’t the author of an eBook set the price?  If it’s too high then perhaps that’s the authors problem, not the distributor. The distributor still gets their cut for the books that are sold.

So todays version of Elgin is up at Smashwords, or should be shortly.   As before please have a look and let me know what you think. If you can plow through all the bad grammar, fumble finger mistakes, cut and paste snafu’s etc.   You can follow the links to the side they should get you there, and they also give you access to the Moon Dreams a sci fi thriller about the year after next year, and if you like that, Under Siege, a novel of the far distant future, where humans are still human far from the wreckage that was Earth.
Cheers
Status from NaNoWriMo:
Target Word Count 50,000 Target Average Words Per Day 1,667
Words Written Today 1,071
Total Words Written 45,541  Current Day 17 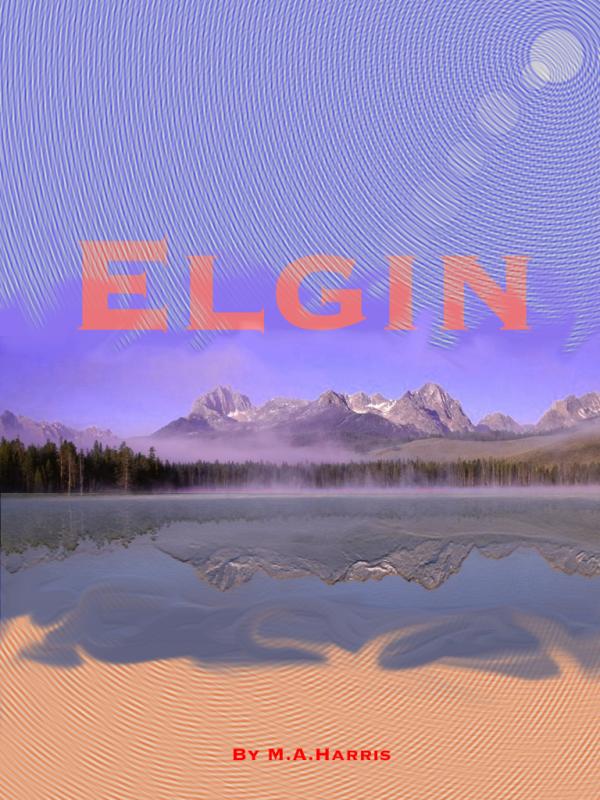 Cover to Elgin By M.A.Harris

So here is the cover I whined about spending a lot of Saturday working on, I think its pretty good.

You should be able to click-through and get to the Smaswords page for the book and download the most current version.  I pulled up the ePub version, seems to work pretty well.  Saw several issues already but that’s what you get for getting the raw unedited form.
Don’t feel bad if you can’t make progress because of all the bad grammar and spelling.  But if you can plow through, suggestions would be welcome, I just won’t guarantee I’ll take them up.
Anyway here is the link to Elgin, again
Regards
So I spent most of the day on this and only got 2,628 words written.  Yesterday I spent less time overall and put out a lot more words.  As per typical there is more than one reason, and writers block per se  was not one of them.  Mainly it was because I spent a lot of today doodling on my iPad creating a ‘professional quality’ (per Smash Words Style Guide) cover for Elgin. I love doodling on graphical projects, and especially on the iPad.  I started out trying to do a typical (atypical) swords and sorcery type cover with Elgin the Iffrit and Elgin the Cowboy etc, and this was stupid, I’m not an artist.  Then I started playing around with scenery and graphics do-dads and came up the the pretty cool cover you’ll all be seeing soon.
While I was doing that I was pondering shifting the ‘publishing’ of the ongoing work the Smashwords, who have kindly made Meatgrinder and their site available to NaNoWriMo works.  Trying to do it on the web page is a bit of a pain since there is something hinky with the import of large blocks of word text into WP, almost undoubtedly me not the site but not something I’m going to bother fighting right now.
Then of course was the fact that I was mucking around in my mind with the usual….you’re getting too long, too wordy, too discursive.  But then I went back and as of this time I really don’t know that I am.  Oh I can see sections an editor would say cut out, and they’d be right technically, but I have to wonder if the shibboleths of the day of physical type setting, or even physical paper and binding, should come across full force into eBooks, I like books that flesh out the character, that spend some time explaining things, describing things.  As long as they’re not boring.
Status from NaNoWriMo
Words Written Today  2,628
Total Words Written  34,332  Current Day  12
Average Per Day   2,861
Words Remaining  15,668  Days Remaining  19
At This Rate You Will Finish On November 17, 2011
Words Per Day To Finish On Time  82

So I did the good thing and contributed to NaNoWriMo (or the organizing group, The office of light and Letters.)   I am going to do this and so am moving forward with my planning/thinking.  It’s probably fairly obvious that 1700 words a day is not out of this world for me, but keeping the fingers fed with coherent story and words is going to be the trick.  We shall see…I still think Elgin’s going to get to go first, but the others all have a corner of my brain….

Intro to :   Mage in Trouble…….(Working title to Fiona’s story)

Fiona MacWallachi stood on the deck of the skyferry and watched the clouds building to the west. The conductor had said they’d make it to Bodwady Bend before the storms came. She really didn’t want to spend another night on the ground watching for young bucks out to get some treaty booty.  Particularly Fiona didn’t like the possible option of having to surrender herself as treaty booty, or killing some plains bred teenage idiot who thought all white skin girls were squealing simpletons and easy as well.

“Bodawdy Bend fine off the port bow!” called the navigator who’d been forward in the eyes of the skycraft.  Fiona moved to look, pulling her looking-glass from its belt pouch.  Bringing the brass tube to her eye she quickly found the town, spotting the towering spire of the Sky Father’s prayer house first. The town, spreading along the East bank of the Missippa river was typical of western Aural treaty towns, its streets and lanes organized on a grid pattern, the manufactories to the east, down wind, of the main living areas.  There were docks on the river for water craft, and on the bluff the shinning oval of a landing pond.  She turned to scan north, picking up the brown and green line that would be the wheeler road that led back to the Sweet Water Sea and the heart of the Aural Republic.

Looking down she realized that the lanes of the town spread out into the treaty platt and she could make out the outlines of Aural style farms, though there was a lot of open grass and scrub land as well.   On a knob of land to the North she could see a fortified great house, probably the Platt Sheriff’s home.

Breathing in a relaxing lungful of cool air Fiona turned and walked back to the second class cabin she had been sharing with a girl coming out to Nanny for the Sheriff’s daughter in law.

Half an hour she was standing on the deck holding on to a grasp rail as the skyferry made its approach to the landing pool, like most it was near the center of town and as one could expect for a small, somewhat isolated community a fair number of people had come out to meet the biweekly Post Ferry.  Forward she could see bundles of periodicals ready for landing as well as leather sacks with the post offices seal branded every few hand spans to make sure they couldn’t be stolen and reused by enterprising, if dishonest merchants.

The tones of the airfans eased, then burped up to a roar, one pushing fore, the other aft, spinning the hull as they slid down out of the sky as the pilot let the charge bleed off the lift spines. In the last instant the hull was aligned with the vector of motion imparted by the wind and the engines.  Then the keel chines kissed the water and the hull was shuddering, slowing, the airfans splashed to a stop.  The slender hundred and some feet of hull settled into the wather with some groans and creaks, as the wooden planked frame of the hull reacquainting itself with the buoyancy of water rather than the focused lift of the spines.

The conductor had done an outstandign job, the skyferry coasted towards the dock with no need for the airfans.  The ferrymen and the dockers called out jocular greetings and ran about tossing ropes back and forth, belaying on iron pollards on the dock and hauling, brining the bow to a soft stop and swinging the stern up tight in a few moments.  They made it look easy and graceful, but Fiona knew that it was long practice that made it look easy, and layered grace on brute muscle and slightly dangerous work.

The gangplank was thrust out from the ferry to land with a thump on the dock, a ferryman, a girl in this case, leapt across with the landing document, meeting a tall redbrown skinned man in the cream buckskins of a Fire Keeper tribal speaker, his feathered head dress said he was a sub chief.  The sub chief read the letter, handed to the man next to him, the post master by the long red jacket with the green pipping.  The post master read it and nodded, and the two mean, both gave it their chop with their quill pens.

Now the postal goods started to come off and the élite and first class passengers and luggage started to flow up the second gangplank.  Fiona sat on her duffel and watched this all calmly, she was used to being middle class, she saw it as a major step up from where she had started.

More on her memories later…its later than I thought, have to get back to this tomorrow….